A group of professional gamblers, known as “advantage players”, hit it big — almost one million dollars big —  at some New Jersey online casinos and are still fighting to collect some of their winnings weeks later.

Advantage players are players who look for exploitable gambling situations that will give the player an edge over the casino instead of the other way around. One common example of an advantage player would be someone who counts cards to gain an edge when playing blackjack. Although blackjack is probably the most well-known exploitable casino game, there are many other games and situations that can give players an edge over the house if you know what to look for.

One of the features of this slot is that wild symbols appear in bubbles that will stay on the reels and move up one row with each successive spin until they “float” to the top and leave the playfield. This is where a knowledgable player can gain an advantage. If the game is found with wild symbols on the reels in the right positions, there is an opportunity to play just a few spins with a considerable winning advantage. 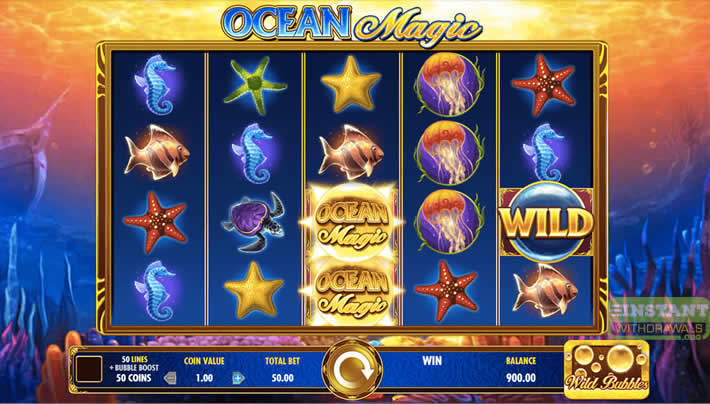 A player familiar with Ocean Magic from brick-and-mortar casino floors stumbled across an online version of the slot while on a trip to Atlantic City in New Jersey. While experimenting with the slot, he noticed some characteristics specific to the online version of Ocean Magic that made the game extremely favourable to players.

The first thing he noticed was that when the game started online for the first time, it started with wild symbols on the reels — the sign that the next few spins were at a favourable advantage for the player. Even better than that, however, he saw that each time the denomination of the bet was changed, like going from $1 per spin to $2 per spin, for example, the reels reset to the same favourable positions if it was the first time that bet size was being played by that player.

Once he discovered that the online version of Ocean Magic had these dream conditions built right in, he continued to look around and found even more reason to smile. Not only was this game available online and highly exploitable, but it was also available at 13 different online casinos within the state of New Jersey. He would be able to play through every possible betting denomination on the game for the “first time” 13 times — and some casinos allowed wagers of up to $3,000 per spin.

After running some numbers, it became obvious that this advantage was just too good to pass up. Looking at how many bets could be placed while the reels were in an advantageous state and at how many casinos it could be done, it was determined that a single player should be able to generate a total profit of somewhere between $80,000 and $100,000 by playing all possible denominations at all of the online casinos that offered the game. Adding in signup bonuses offered by most of the casinos only made the deal even sweeter.

Spreading The Wealth Around

After putting all of this information together, the player called some of his friends who were all too happy to fly into New Jersey, fund some casino accounts, and take advantage of the promising situation themselves. The group managed to play for about five days before the game started to disappear from the online casinos’ offerings. The casinos had obviously noticed something going on and wanted it to stop. By that time, though, the group had already run up a collective profit of about $900,000.

Some players were able to cash out accounts from casinos successfully, but after a few weeks of waiting, about half of the money was yet to be paid out. Some of the casinos have said the transactions and games are under investigation while several others are citing a New Jersey state law that says anyone who wins more than $50,000 may have that money withheld if they owe child support payments. The excuse is that payments have been delayed because they are investigating whether or not any of the players owe child support.

As the days have passed, several more payments have been made from various casinos and the group is getting closer to the full $900k that they are owed. As far as we know, only three casinos have yet to pay out the owed winnings. Borgata/PlayMGM is holding about $130,000. Caesars has yet to release about $40,000 and could possibly owe more since the game was actually taken offline while one of the players was in the middle of a spin. And the Hard Rock is withholding about $700 that was left on one of the accounts that end up losing at the end of the run.

Sometimes The House Does Lose

Although some payments are still outstanding, the players should get all of their money in the end. The casinos will, of course, look for signs of cheating and delay payments, but the group did nothing wrong and most certainly did not break any New Jersey state gambling laws. Nobody cheated, they only took advantage of a favourable situation that was built into the game. Nor did the game malfunction, giving the casino an excuse to void the plays. The game played exactly as it was designed to play. There was no tampering, hacking, or malfunction of any kind. It’s also not the first IGT slot machine known to have an exploitable weakness.