The easiest way to win a million dollars playing a casino game is to play some kind of progressive jackpot slot game with a million dollar jackpot. You can find these both online and offline. The biggest of these, of course, is the Megabucks slot machine progressive in Nevada.

You have a minimum jackpot that starts the game. (In Megabucks, the starting jackpot is $10 million). As players make bets on that slot machine, a tiny percentage of that bet is diverted toward the size of the jackpot, which means that the jackpot keeps growing as people play the game.

Other progressive jackpots are networked. Sometimes they’re just networked with other games in a single are of a casino. These are called local area network jackpots.

But games like Megabucks are called wide area progressives. These machines are networked across multiple machines in multiple casinos, and play on any of them increases the jackpot. Anyone who hits the winning combination of symbols – on any of the networked machines – wins the prize amount.

And keep in mind that the STARTING jackpot is $10 million. It goes up from there.

Winning the Megabucks slot machine game is like winning the lottery.

The odds of winning are roughly 1 in 50 million, though, so unless the jackpot is over $50 million, it’s still a negative expectation bet.

The other way to win a million dollars is to parlay a small amount of money into a much larger amount of money by winning multiple bets in a row. Realistically, this is impossible at most games in most casinos, because the casinos generally keep the maximum wagers pretty low to prevent this.

But look at how this would work:

Keep going at that rate, and you’ll hit a million dollars in winnings  faster than you might think:

After the 4th bet, you only need to win one more bet to hit a million dollars, but you don’t even have to bet your entire bankroll.

You only have to win one of those bets, too…

So after winning 4 single-number bets in a row, you can place 7 bets before running out of money in your quest to win a million.

The trick with this strategy is to convince the casino to let you ignore their table limits.

The odds of winning are terrible, as you might imagine. Winning a single number bet is already a 37 to 1 shot. Winning that 4 times in a row is an even worse probability.

Still, if you can convince a casino to let you ignore their wagering requirements, maybe for publicity purposes (it happens), this is way better than trying to win the lottery or the Megabucks slots games.

Winning (or Even Just Placing) in the World Series of Poker 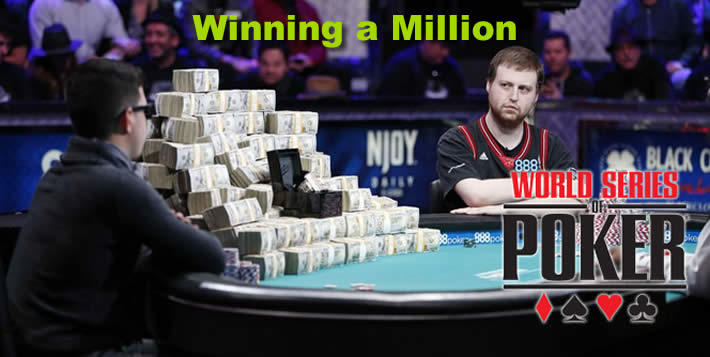 It will cost you $10,000 to enter the Main Event of the World Series of Poker. If you make it to the final table, you’ll win at least a million dollars – maybe more, depending on how you finish in the tournament.

What are your odds of winning the World Series of Poker?

One easy way to start that calculation is to assume that you’re exactly as good as the average player in the tournament, which means you have just as good a chance at the prize as anyone else. Then you look at the number of entrants versus the number of places that pay off $1 million.

Now let’s assume you’re twice as good as the average player, which means your probability of winning is doubled. Now the odds of finishing the World Series of Poker as millionaire are 1 in 500. Nothing else on this page offers you better odds of winning a million dollars, but there’s some more worked involved in this quest.

You must become a good enough poker player to be twice as good as the average entrant to the World Series of Poker.

And don’t forget that many of the players in the World Series of Poker Main Event are some of the best players in the world. So that might be tougher than you think.

If I had to choose a way to win a million dollars, though – this would be my pick every time. Of course, I like playing poker.

Most lotteries have big jackpots, but if you really want to get rich in the United States gambling, the games to play are Powerball and MegaMillions.

The Powerball jackpot costs $2 to play, and it starts at $40 million. The size of the jackpot increases until someone wins, too.

The MegaMillions jackpot also costs $2 to play, and it starts at $40 million, too. Like Powerball, the size of the jackpot increases until there’s a winner.

The odds of winning these jackpots are about 1 in 300 million.

This means that if the jackpot for one of these games gets over $600 million, the game is a positive expectation bet.

And really, when you’re talking about odds like that, expected value becomes meaningless. After all, you’re never going to buy 300 million lottery tickets in a lifetime.