Pompeii is an Australian pokie (slot) released by Aristocrat in 2004, and it stands the test of time as players keep playing this slot game ever since. Pompeii slot actually one of the most popular games in both, land based and online casinos. Not as Queen of the Nile, but close.

There are 243 ways to win (part of Aristocrats Reel Power series) in Pompeii and there is only one bonus game, consisting of 10, 15 or 20 free spins that also have an occasional chance of landing a 3x, 5x or 15x multiplier on individual wins. Minimum bet in Pompeii is $0.50 and the maximum is $125, which means it can accommodate players of all budgets. The game draws you into a world that is no more, the ancient decadent city of Pompeii that was lost in a volcano eruption.

Here you can play the Pompeii slots machine for fun. To play it for real money, check our list of Fastest payout Aristocrat casino sites.

Graphics is as you would expect from a pokie machine, and there aren’t any animations either, so it’s just the whole land-based experience on your desktop computer. It wouldn’t make sense to add some extra graphics to this type of slot game so we won’t hold the absence of it against Aristocrat and Pompeii. While you play this one, you do feel like you’re in a land-based casino.

This is a standard land-based style casino game with 5 reels and a total of 12 symbols including Scatter and Wild. Volcano is the wild symbol when it’s on reels 2 and 4. There isn’t much to do here other than to poke the Spin button and watch what happens on the reels, hoping to land at least three Scatter symbols, or some five-of-a-kind. 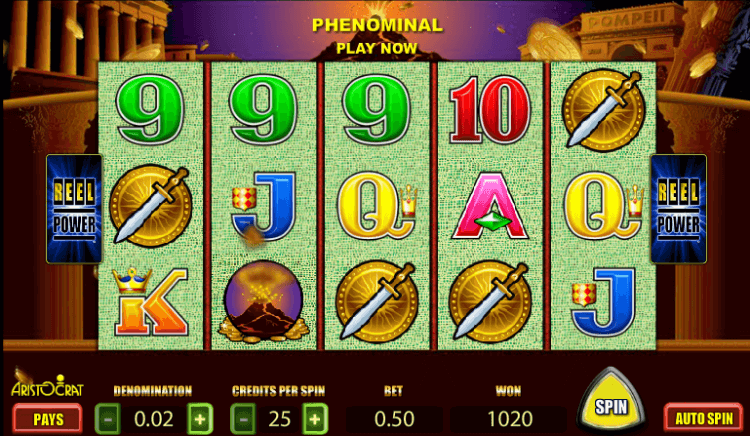 When the Wild is on reel 2 then you get 3x, if it’s on reel 4 then you get 5x, and if you land both then you get 15x. Nice. But, in general, free spins aren’t that rewarding, and it’s the only bonus feature of the game so Pompeii lacks the punch if you compare it to modern flashy slot games with several exciting bonus games.

Pompeii has return to player (RTP) of 94.999%, which isn’t so bad, and players who enjoy this type of game will be ok with it. Those online players who prefer more modern slots, won’t look at this one twice, but there’s a whole army of players who love Pompeii. If you happen to love pokies and don’t care about innovation and flashy features, then do give this one a go.

If your search is for higher odds, check our “Which slot machines pays the best” article.