Immortal Romance is a Microgaming slot themed around the Twilight Saga.  It’s not a branded slot and Twilight was just the inspiration for a whole different gaming universe with unique characters. This is one awesome slot game which will be enjoyed by fans of Twilight and those who haven’t even heard of it.

Immortal Romance slot creates a very special atmosphere. This is why it’s among the games with longest playing time in one go. You are enticed to keep going and to progress through the features. Personally, i found myself numerous times at 3 am, sitting there half dreaming, but unable to force myself to go to sleep.

Give it a try here and see if you like it. Naturally, free slots are not like the real thing, so if you wish to play Immortal Romance and other Micro slots for real money, check our list of reputable Microgaming Casinos.

There are five pretty worthless symbols that just take up space on the reels, but the characters are really something. There’s Sarah, modeled by Bella Swan, 800-year-old immortal geneticist Michael and dark-haired 200-year-old vampire Troy, with Amber the Caribbean witch as another female character.

Immortal Romance is the Wild symbol and it substitutes for all symbols except for Scatters. Interestingly, the game keeps track of all the winning combinations you landed, and you can see your progress in the View Pays screen.

The Golden Lion is the Scatter symbol, and if you get 3, 4 or 5 of these you’ll unlock the Chamber of Spins. Now, the interesting part – this isn’t just a one-time thing. Multiple entries into the Chamber of Spins will sequentially unlock further bonus features. You’ll have to enter it 15 times to unlock the last level!

This is why Immortal Romance is so unique and so loved by players. There is an entire storyline unfolding before your eyes as you spin the reels, and the game immerses you into its dark universe. 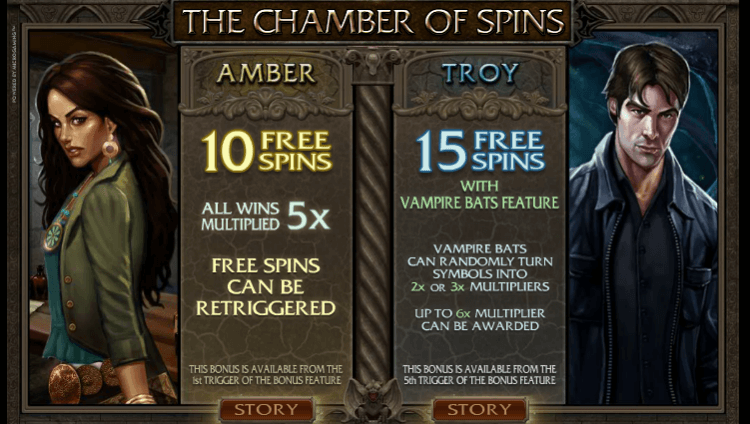 Eventually you’ll end up with a bonus game that consists of 25 free spins with the Wild Vine feature, which is a symbol that randomly appears on reel 3 and randomly transforms symbols into additional substitutes. 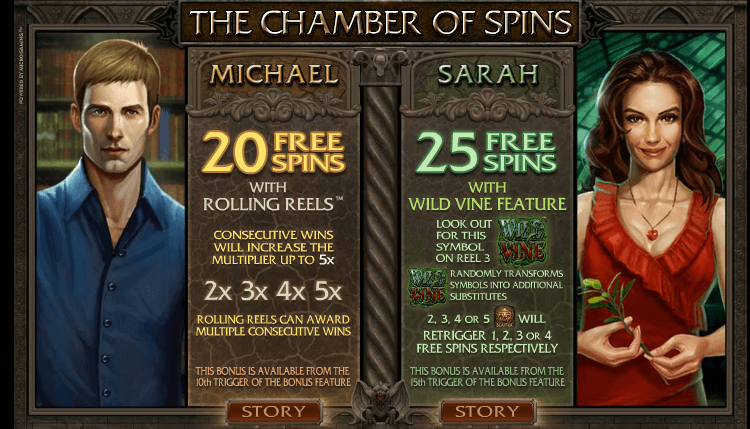 Wild Desires feature triggers randomly during base game, and turns up to five reels wild. This doesn’t happen often but is, of course, very rewarding when it does.

Immortal Romance has 243 paylines. The minimum bet is $0.30, while the maximum is only $30. Theoretical return to player (RTP) is 96.86%, which is very solid. It also doesn’t feel like you need to enter the free spins game in order to get some nice payouts. Of course you want to, but there is a lot going on in the base game as well.

Maximum number of coins you can win is 364,500 and that’s really something. Any way you look at Immortal Romance slot machine, you’ll see one awesome game. Since its release in December 2012 it is regarded as one of the best slot games out there, and definitely among the best Microgaming titles.